The task of prettying up the kitchen was relatively straight forward because we chose not to remove and repaint all the interior fiberglass (i.e. kitchen counter, seat bases and closet). We did not to do this because the existing shelving was in pretty good shape, and weren’t sure it was necessary right now.

So what we chose to do was add a backsplash. We found a stick on backsplash that looked pretty awesome. Although it was rather expensive, we thought for such a small space it would look great and be easy to install. It did in fact look great, until it fell down 24 hours later! Evidently the stickiness was not enough to adhere it to the interior insulation of the boler. And, as it turns out we discovered they are also incredibly flammable (I’m not entirely sure why anyone would manufacture a highly flammable backsplash, but that’s a conversation for a different day). So, we decided not to put them back up. We may at some point add a different backsplash, but for now we decided just to leave the idea entirely.

We added a magnetic spice rack above the stove. Typically this magnetic spice rack comes with six, so G just used tin snips to cut it down in size to fit the space perfectly. We placed it at the very right hand side of the stove, as to be coordinated with the edge of the backsplash. Of course we did this before the backsplash fell down and now its location may appear a bit odd. But, we have found it incredibly handy and we cannot remove it without risking damaging the interior wall, so we are still happy with it exactly where it is.

We added a bar above the sink. The bar holds little metal baskets, which we use for our camping silverware and random things we frequently need (i.e. soap, dish scrubber, matches, etc.). The containers easily lift on and off, so we can store them we are driving and easily bring them out to a picnic table. As an added bonus I was able to find the perfect green to match the original avocado colouring of the boler! All of this was bought at Ikea for a relatively good price. We bought from the FINTORP line of products, but there are more options.  We cut the bar to the exact size wanted using an angle grinder with a metal cutting disk.  As an added bonus the ones I chose (purely by coincidence) had an insert that allowed us to cover an imperfections in the cutting.  We attached it to the wall by riveting it the exterior.  We like this little touch so much that we plan to add another one on the side of the closet sometime this winter. This will allow us to store our glasses at night, keep a flashlight handy, etc. 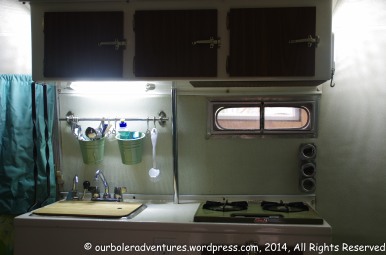 We replaced the 1975 sink faucet with a new one. We did this due to a leak with the old one, but I have to admit that I also wanted one that looked a bit nicer. Interestingly, we almost had to buy the exact same one that we took out because it fit in the tight space required to accommodate the hand pump. It turns out, most of the modern day ones that have a long enough head for the water to come out of, also have larger handles that do not work in the space if you want to be able to use the water pump. After trips to Rona, Home Depot and Lowes we did find one that fits and looks good at Rona.

We replaced the bar that runs between the kitchen lower and upper kitchen cabinets.  The metal bar is a conduit for the electrical, so it was critical that it remain and not just be removed.  We bought a shower curtain bar at Rona, cut it down to size and put the new on it.  It fit perfectly. 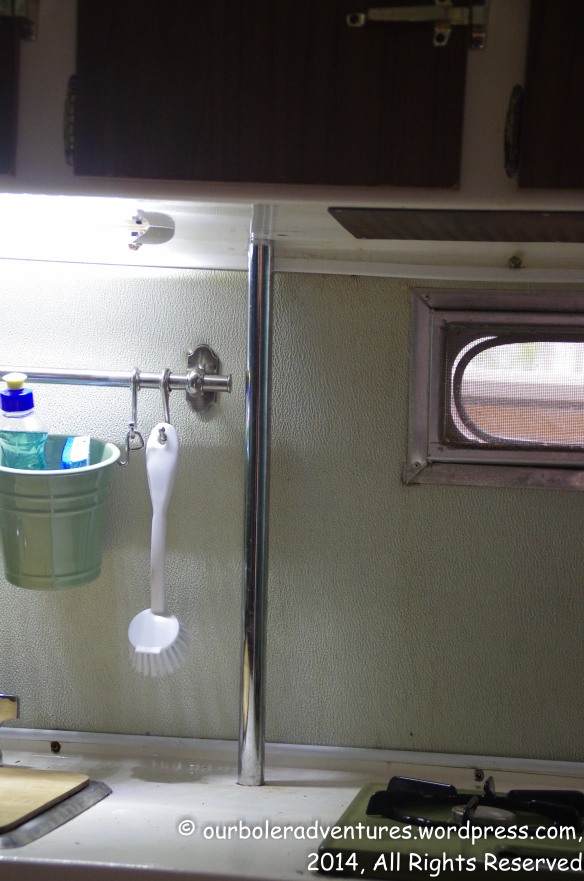 We replaced the damaged and nearly impossible to open original ice box. We want to put in a three way refrigerator, but decided due to costs to put in a new ice box for the next year or two. We ordered a new from Scamp. It was pretty easy to instal as it fit perfectly, but after using it we are thoroughly disappointed with the product. An ice block melted in about 36 hours, and as such our new and improved icebox is virtually useless as it doesn’t even last for a weekend camping trip. This means, we will be likely be buying replacing the fridge with a three way refrigerator sooner than expected.  (You can see the current icebox in the photo below).

Another quick upgrade we did was replacing the white edging at the bottom of the upper kitchen counters.  The edging is available at either Home Depot or Rona, and is really cheap.  The installation was also incredibly simple, that I did it with almost no help from G.

We also removed the original propane heater that was located below the sink. As neither of us know how to fix propane furnaces, we simply suspected that it was in rough shape and probably wouldn’t’ have worked. As well, evidently they are incredibly dangerous, and nether G or I are interested in dying in our sleep, so we just removed it. For now, we just covered the hole with a white piece of wood that we had in the garage from an old shelf. We plan to make all new cupboard doors soon, so this will be upgraded to a real door when we do all of the cabinet doors.

A few more items are still on the to-do list, most importantly new cupboard doors that we hope to do over the winter months. I’ll be sure to update everyone on the cupboard doors when we do them.

5 thoughts on “Prettying Up A Boler Kitchen”